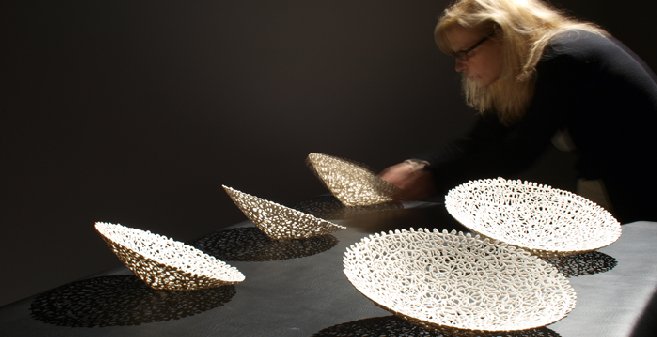 I believe that the greatest undertaking of the artist is that of professional maintenance. As a matter of fact, along with spontaneous creativity, you indissolubly must add an elevated professional competence regarding technique; through reading and observation, the joy of experimentation, of combining, and of moving forward.

Women, in particular, haven’t truly renounced their femininity or their conceptions of life, but express it in a sophisticated synthesis, a balance of forms and integrated language in their work.

My design is born from a rereading of past artistic production through a filter of formal personal sensibility directed towards the making of a functional or sculptural object. The forms generated are aesthetically accurate and display a strong sense of the real feminine character, of grace, of elegance and of attention to detail.

Thus, “Crespines”, objects originally of Faentinian tradition that were used in the grand European courts of the 16th and 17th centuries, have been remade in porcelain paper clay for a new collection which began in 2005.

It was challenging and exciting to create forms derivative of the past, but reconsidered with completely new techniques and philosophies.

These pieces have been formed using an incredibly thin decorative weft that ultimately creates their supporting structure: it’s an art of addition, not of subtraction, as was commonly done in the original renaissance crespines, where the perforations were created by piercing and cutting out shapes from the existing closed forms. The procedure anticipates the moulding with a freehand syringe on concave or convex refractory supports and requires a high temperature firing. Sometimes the forms are then mounted on hand-blown glass bases, which have been designed and commissioned in Tuscany. The round shape is prevalent in my work, which can often be found in Italian Renaissance architecture
They present themselves in this way, like ample goblets in ceramic filigree, a type of interwoven lace of overlapping spirals in precious porcelain “thread". Objects of light and vulnerability, which live in illumination and shadow, in tactility, in supreme whiteness and imperceptible vibrations.

It’s a new way of interpreting this material, of which the confines no longer speak of “physical mass”, but instead of evocative transparencies.

In the installations, life and existence are given to the shadows. The butterflies which are created on the wall are born of a combination of one porcelain wing and the other which is created only virtually by it’s own shadow. In this way, the expressive and metamorphic world of the shadows are so evident.

One part of the work is real while the other is temporary because the shadows are ephemeral and elusive.